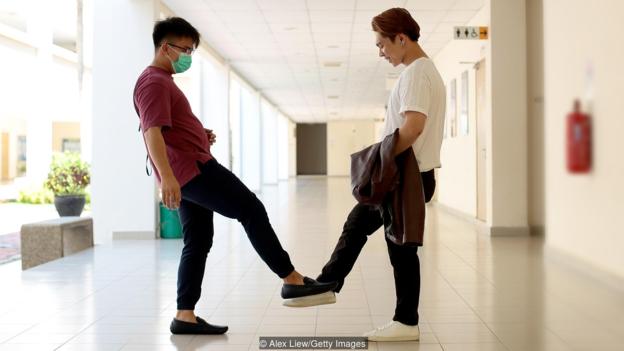 Covid-19 has fundamentally changed the way we interact, and physical greetings with potential to spread the virus are among its cultural casualties. But the ways people around the world are adapting to this new reality suggests that we haven’t yet lost the human urge to say “hello”.

If customs and traditions are not applicable or harm people, we change them

Greetings are deceptively simple, but verbal and non-verbal greetings help us define the boundaries of our interactions with others. “The greeting is a little bit like a sponge. It absorbs all these different things: the relationships that we have, the kind of person that we are,” said Alessandro Duranti, professor of anthropology at the University of California, Los Angeles. “[Greetings] acknowledge something that’s going on in a much broader context than just that little interaction” – in this case, Covid-19.

Popularised by many high-profile politicians, the elbow bump has replaced the handshake in parts of the US (Credit: Mandel Ngan/Getty Images)

From the ancient, clasped-palmed Indian “namaste” to the brand-new elbow bump used by US politicians, the ways people are reshaping their greetings for coronavirus also reveal insights into their respective cultures. To find out more, we spoke to locals in seven countries about the cultural significance of traditional greetings and how Covid-19 is changing them.

Perhaps the most notable greeting to emerge recently is the Wuhan shake, a handshake substitute named after the city where Covid-19 originated. The “shake”, which involves participants tapping the insoles of their feet with each other, kicked off in March after videos of the new greeting went viral. Since its debut, high-profile political figures like Russian energy minister Alexander Novak and Tanzanian president John Magufuli have publicly performed the Wuhan shake, inspiring speculation that it might become the world’s new handshake.

Yet, it seems unlikely that the Wuhan shake will replace more typical Chinese greetings, like the modern handshake or the 3,000-year-old fist-in-palm bow still used during Chinese New Year, weddings or other celebrations. Despite ample press coverage, the Wuhan shake has yet to become routine or even well-known in other parts of China. This is likely because the shake evolved as a light-hearted mimicry of a social interaction now forbidden by social distancing, said Chuan-Kang Shih, a cultural anthropologist at the University of Florida.

The Wuhan shake foot greeting started in China and has since spread around the world (Credit: Alex Liew/Getty Images)

“People do [the Wuhan shake] to show that, even in such a time, we can show our intimacy in such a ridiculous way,” Shih said. “People just wanted to be playful and cheer up, so they invented this mimicry.”

A week before the World Health Organisation declared Covid-19 a pandemic on 11 March, indigenous Maori groups across New Zealand had already instructed their members around the country to avoid greeting each other with traditional hongi, in which two people press their noses and foreheads together.

You may also be interested in:
• What coronavirus reveals about the world’s culture
• Love in the time of closed borders
• The indigenous communities that predicted Covid-19

Many Maori have since pivoted to a casual lift of the chin and eyebrows to acknowledge each other, said Rangi Matamua, professor of indigenous studies at the University of Waikato. These nods, while already commonplace before Covid-19 and not necessarily exclusive to the Maori, have replaced hongi for the immediate future.

The hongi greeting has a profound meaning for New Zealand’s Maori culture, but it has been adopted by many Kiwis and visitors to the island (Credit: Chris Jackson/Getty Images)

“‘The most important thing in the world is people,’” Matamua said, quoting a Maori proverb. “So, if customs and traditions are not applicable or harm people, we change them.”

French cheek-kisses or bises were also discouraged during the 1918 influenza, yet they took longer than hongi to disappear during this most recent pandemic.

Less than a week before the French government imposed a shelter-in-place order, 66% of one survey’s respondents reported they still exchanged bises. By the end of March, that figure had dropped to 6% as the French replaced them with a verbal version, exchanging “Bises!” or the more familiar “Bisous!” to greet each other from a distance.

As coronavirus spread, many French were initially reluctant to give up their famous double-cheek-kiss greeting (Credit: NurPhoto/Getty Images)

There is cultural precedent for this shift, as verbal bises are sometimes used by contagious individuals during flu season. Still, the nationwide transition has been rocky, especially for French women, said Claudine Gauthier, professor of anthropology at the University of Bordeaux. While men often prefer to exchange handshakes among themselves, women generally use these two-cheek kisses to greet everyone, which may explain why some were slow to drop them.

According to Gauthier, the general reluctance to drop bises is proportional to the greeting’s growing importance to French cultural identity. Until the late 1960s, bises remained an intimate greeting, exchanged only between close family members and with small children.

Within that context, they symbolise the informalisation of French culture and loosening social restrictions on cross-gender interactions. Refusing a bise prior to social distancing was considered cold, so whether verbal bises will persist post-coronavirus will depend on the intensity of the public health discourse discouraging them, Gauthier said.

Many Tanzanians have replaced handshakes, hugs and bowing to elders who then touch a young person’s head with foot “shakes” (Credit: Anadolu Agency/Getty Images)

Physical greetings, such as the formal bows that young people offer to elders, who reach down to touch the youth’s head in return, relate back to this larger sense of hierarchy. Between peers, a long handshake, hugs and cheek-kissing are also common, according to Mwijage.

Recently, foot “shakes” that mirror China’s Wuhan shake and casually bowing to people of any age from a distance are the new norm, Mwijage said. Because both gestures intentionally create space between people, Mwijage worries they could eventually compromise communal ties.

Legs are made to walk not to greet

“Covid-19 has created a distant relationship and… eroded how people should show respect and care to each other,” Mwijage said. “Legs are made to walk not to greet. Does [a foot shake] show love? Care? Respect?”

According to Mwijage, the use of face masks in Tanzania also distorts local verbal and nonverbal cues, such as a twisting of the lips frequently used to communicate agreement and other emotions. He predicts that foot shakes and bowing will soon be joined by more innovative greetings as social distancing continues.

Turkish greetings reflect the country’s Islamic heritage, hospitable culture and the social role of elders. Young people will clasp the hand of an elder relative, kiss it and then touch it to their own forehead, particularly during holidays. A double-cheek kiss is standard among colleagues, friends and even new acquaintances.

“There’s a whole thing about the symmetry and the doubleness [of cheek kissing],” said Kenan Sharpe, a journalist and expert in Turkish pop culture. “It’s an even number here, always. There’s a sense of, like, if you don’t do the other side, it’s like something’s missing.”

Since the pandemic, many Turks have revived the centuries-old eyvallah greeting, where one puts a hand over their heart and bows slightly (Credit: Anadolu Agency/Getty Images)

For Turks, greetings are not just a way of welcoming people but also of showing their importance. In the wake of Covid-19, Turkish people turned to Islamic history to find a pandemic-friendly greeting that preserves these values.

The eyvallah is a centuries-old no-touch gesture likely used by the Ottomans that consists of placing the hand over the heart and bowing slightly. The movement signifies that person is in your heart, indicating both respect and endearment. The word “eyvallah” has Arabic roots and literally means “we entrust to God”, and the physical gesture has variations all over the Muslim world.

If anything, [social distancing] perhaps makes us realise what a gift it is to be part of a community [and] to have that kind of closeness with one another

Eyvallah is a common cross-gender greeting within more socially conservative Turkish communities, and it has become more visible thanks to its representation in the hit Turkish TV series Resurrection: Ertuğrul, a show about the 13th-Century leader of the Oghuz Turks, whose son Osman founded the Ottoman Empire. It works for contemporary leaders, too. On 9 March, President Recep Tayyip Erdoğan used it to greet NATO Secretary General Jens Stoltenberg.

Since local health ministries banned physical greetings, many Emirati have been replacing hugs and traditional Emirati nose kisses (a traditional Bedouin greeting that consists of a simultaneous nose touch and handshake) by waving or by placing a hand to the heart, said local writer and publisher Natasha Amar.

Like the hongi, handshakes and hugs, traditional Emirati nose kisses have stopped in the age of social distancing (Credit: Haider Shah/Getty Images)

Pressing a hand to the heart was already a common greeting among Emirati of the opposite sex before Covid-19, but contactless same-sex greetings are a cultural abnormality that Emiratis are struggling to adopt. Emirati women typically exchange cheek-kisses while men share Emirati nose kisses.

“If anything, [social distancing] perhaps makes us realise what a gift it is to be part of a community [and] to have that kind of closeness with one another,” Amar said.

A common thread among Afghanistan’s numerous ethnic groups is an emphasis on respect and honour and a fierce love of God and country. Traditional Afghan greetings, such as handshakes, hugs and kisses, express these values and speak to the nation’s warm, high-touch culture. In some provinces, as many as eight kisses may be given in a single greeting.

In some Afghan provinces, as many as eight kisses may be given in a single greeting (Credit: Noorullah Shirzada/Getty Images)

Afghans tend to hold non-formal conversations in close proximity. In fact, good smells indicate “good spirit”, according to Romanian professors Cosmin Ivanciu and Viana Popica, so backing up further than another person can smell you may be considered rude.

But social distancing has pushed people to adapt with a right-handed salute or wave, gestures formerly used to greet someone from afar, said Kabul resident, Saber Alimi.

Afghans hug and kiss “to demonstrate their love,” said Alimi. And while these physical greetings also serve as a way to honour people, the almost militaristic salute visually encapsulates Afghans’ sense of respect for others.