Volax: Spring escape in the mountainous village with the lunar landscape, on Tinos, in the Aegean 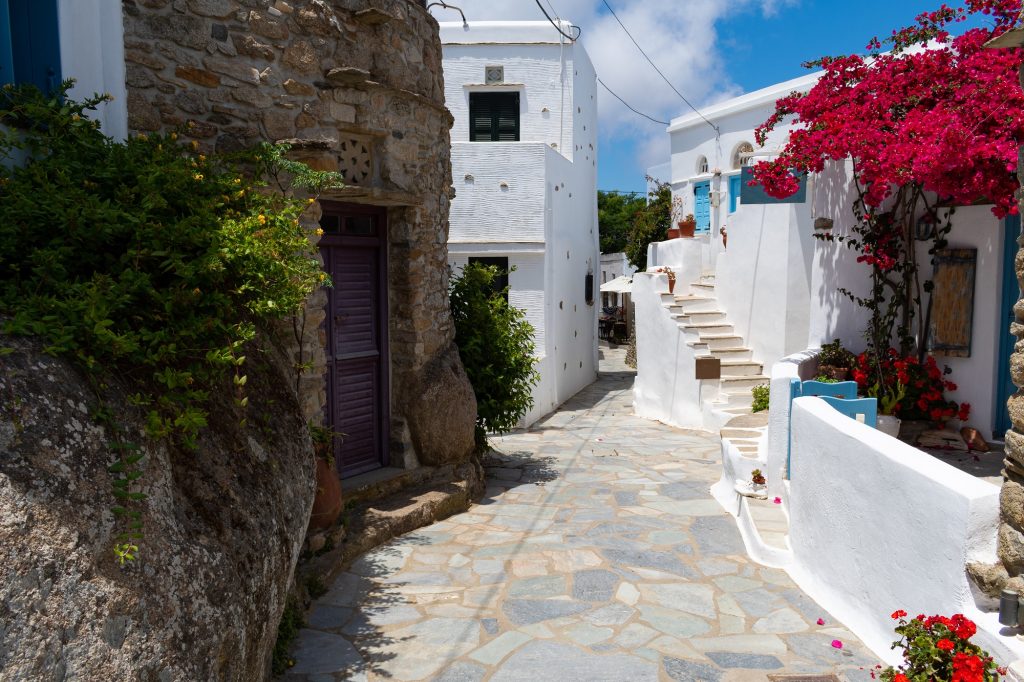 It may not be a seaside village with famous beaches, however, Volax is one of the best-known villages in Tinos: both for its scenic mountainous beauty, and for the otherworldly rocks that surround it creating a unique landscape – it feels like being on the Moon.

Volax is in the centre of Tinos, built at 284 m altitude, on a small plateau, just 17 km from Hora. According to the 2011 census, it has only 53 residents, while one of its unique characteristics is the fact that it is one of the mostly Catholic villages on the island.

The otherworldly rocks that surround the village create a feeling like being on the Moon. / Photo: Shutterstock

The first official record of Volax is traced to 1618, in documents that are now in Italy. Its name seems to come from the word for the strange rocks (in Greek) that surround it and has known many variations. Even in the 1990s, there was a linguistic dispute around the spelling of the name.

The strange rocks around the village have already been observed since 1700, catching the attention of European scientists who visited the island. After the establishment of the Greek State (1830), an official delegation from France arrived, while King Otto sent the renowned German geologist Karl Gustav Fiedler to study them.

In the late 1990s, the University of Athens submitted a petition to the International Union of Geological Sciences for the preservation of this unique geological heritage.

There are some rooms to let in Volax, for those who want to visit for more than a daytrip. Photo: Shutterstock

Even though it’s a small village, mostly visited on daytrips, to see the famous rocks, Volax has a few accommodation options for anyone who wants to spend a few days there. There are no hotels, but there are some rooms to let.

“Kafe-Ne” is a traditional coffee shop, perfect for a coffee, or a glass of ouzo or raki. Photo: Kafe-Ne

Where to go for a coffee and/or drink

“Kafe-Ne” is a traditional coffee shop, perfect for a coffee, or a glass of ouzo, raki or wine, that you can enjoy with tasty meze. They also serve drinks, as well as homemade liquors, and even some cocktails.

It’s a traditional coffee shop housed in the owners’ grandmother’s old (restored and renovated) house. They have kept the walls and furniture and added chairs and marble tables. The two tables on the upper balcony are a very special spot for those in need of extra quiet.

“Kafe-ne” also has homemade spoon sweets (traditional preserves), ipovrihio vanilla (it means vanilla submarine and is a sugary concoction served on a spoon that is dipped in a glass of cold water), ekmek and cheesecake. Among the meze they serve with ouzo, the fried courgette balls and the plateau with the various local products stand out.

There are only two taverns in the village, both of them great that will satisfy all your needs, since their menus include options for everyone, including vegetarians.

The tavern “Volax” is at the village’s entrance and is known for its slow-cooked lamb, its moussaka, and its homemade galaktompoureko (Greek custard pie) that they serve for dessert.

The tavern “O Rokos” has typical Greek cuisine and makes excellent gigantes beans, as well as rabbit (when it’s available). One advantage is their balcony that a great view of the sunset in the summer.

Idyllic Volax is one of the mostly Catholic villages in Tinos. Photo: Shutterstock

4 things worth doing in Tinos

It’s a given that you’ll visit Volax to see the strange rocks that have made the village famous internationally. However, once you get there, you’ll realise it’s an idyllic mountainous village in the Aegean and it has a few more sights to see.

The rocks of Volax were believed to be the remains of the mythical clash of the Titans. / Photo: Shutterstock

The rocks that are scattered around the village’s plateau might resemble the Moon, but they are made of granite that came from a volcano and were sculpted by nature in shapes that, to some, resemble birds or animals.

In the past, people believed that the rocks were the remains of the mythical clash of the Titans. Of course, today the explanations about their origins are more scientific: some think that the rocks are the result of a meteor crashing in the area, but most believe that they resulted from a volcano explosion 20 million years ago.

The village’s unique landscape attracts many Europeans who like bouldering. Photo: Shutterstock

What’s very impressive is that some houses in Volax are built on these rocks, incorporating them in their architecture. The residents are so familiar with the rocks that they’ll show you the best spots to admire them and take their picture – like for example the “Vourakis” opening, just 3 minutes from the church.

The rocks attract tourist from abroad, especially in the summer, who come here for bouldering (on low rocks, without a rope).

The village also has a folklore museum, that’s open between Easter and October. / Photo: Shutterstock

The main occupation of the villagers was livestock farming, as well as basket weaving for which it gradually gained a reputation – their baskets were very popular in Tinos, especially in the past when there were no plastic bags.

The art still survives, but if you’re visiting Volax between Easter and October, it’s worth catching a glimpse of its great past. The Volax Folklore Museum was created in 1992 by the village’s association, it’s located next to the church, and its collection includes around 250 objects (tools, objects, furniture, books etc) from the daily life in the village in the 19th century and early 20th century.

The open-air theatre brings life to the village during the summer months. Photo: Shutterstock

The village’s long tradition in basket weaving is linked to the old legend about the miracle at the chapel of Panagia ton Kalamion. Photo: Shutterstock

A picturesque chapel honouring the Holy Mother, that is located 11 km southeast of the village. It’s also the village’s oldest church, having been around for many centuries. The local legend says that about 2-3 centuries ago, the residents of Volax were attending mass when they suddenly saw Algerian pirates coming from the mountain. They started praying to the Holy Mother, and reeds grew around them miraculously, completely hiding the chapel. The pirates thinking that it was just a reed cluster, left empty handed. This event is celebrated each year the first Thursday after Easter, with a festival.

It seems that there used to be a small chapel dedicated to the Holy Mother there, already since 1650, that had to be reconstructed in 1756 – there’s a written mention in the Venetian records of the time mentioning the “La chiesa di Calaman” (that is the Panagia -holy mother- ton Kalamion -of the reeds). Since then, many constructions took place, some small, others more extended. The exterior today, apart from the bell tower that was added in 2008, remains the same since 1792.