The discovery of the Ancient Greek city Tenea 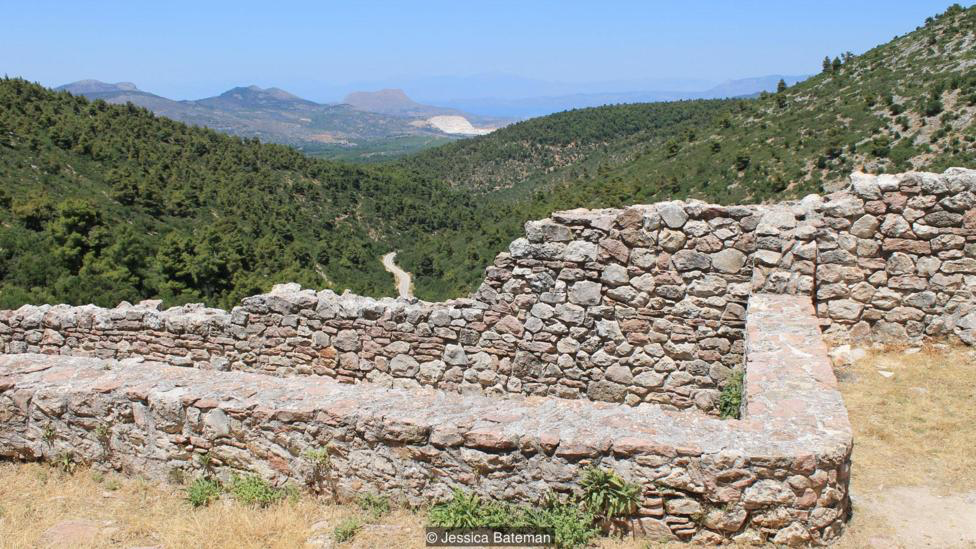 One of Greece’s top archaeologists, Eleni Korka, recently made the biggest discovery of her 40-year career: the mythical city of Tenea, which was built by Trojan prisoners of war.
It was a baking hot summer’s day and I was in a car driving through the dramatic hills and lush vegetation of the Peloponnese in Greece. “Look at this whole plain,” my driver, Eleni Korka, said, gesturing out the window. To our left was a huge, flat area, covered in olive trees and scrub bushes. Where it ended, the earth transformed sharply into forested mountains.

“The city of Tenea covered this whole place,” she told me. “It’s above sea level and there’s a cool breeze, so the summer palace would probably have been built here.” She pointed to a traditional restaurant tucked under a distinctive, almost square-shaped hill. “And this taverna is built under a watermill,” she said.

Korka is one of the country’s top archaeologists. A Greek American, she recently made the biggest discovery of her 40-year career. The lost city of Tenea, which is mentioned in multiple Greek myths and historical texts, such as the ancient legend of Oedipus, the mythical king of Thebes who unwittingly killed his father and married his mother, was uncovered by her and her team last October, buried under the fields we’re now driving past.

The lost city of Tenea was uncovered last October in the Peloponnese in Greece (Credit: Jessica Bateman)

You may also be interested in:
• A hidden world under an Italian sewer
• The temples that had to be moved
• The key to the origin of the Americas?

According to myth, the city was founded by the Trojans sometime around 1100BC and built by prisoners of war. They chose this spot because it was on the road between Corinth and the ancient settlement of Mycenae. Oedipus was said to have been raised here after being sent away as a baby. And it was one of the largest and most prosperous cities in the ancient region of Corinthia in the northern Peloponnese. Until now, however, no-one could work out exactly where it was – or why it disappeared.

The search for Tenea began in 1984. Korka was just five years into her career when she received a call from some local villagers digging a water channel. They had hit an ancient sarcophagus and broken it in half. Korka went to look. “The minute I saw it, I understood it was something unique,” she said. “Sometimes, a find connects with someone. It’s almost spiritual.” The vase-shaped coffin had delicate paintings of lions on the interior and contained a skeleton and offerings to the deceased. “We don’t have another one with drawings like that,” she explained. “We also do not know what ancient paintings looked like… We have no other sample from the Archaic period.”

“The minute I saw it, I understood it was something unique”

Korka knew Tenea was thought to be in the area, based on ancient historians’ writings, which stated it was somewhere between Corinth and Mycenae. But her young age, inexperience and a lack of further evidence made it impossible for her to get a licence for excavation. “I did not have the confidence or ability to argue why this was so important – it was more intuition-lead,” she said.

However, illicit antiquities smugglers had known about the site for years, and would often pay local farmers for vases and coins they came across. In 2010, Korka worked alongside the police and informants to intercept the illegal sale of two statues that had been looted nearby. “The statues proved Tenea was a very prominent city with high levels of art,” she said. She finally obtained permission to dig in the area, and in 2013 the excavation began.

We stopped in the nearby village of Chiliomodi for coffee and pastries. The oldest houses here were built here around 200 years ago, and Korka explained that many of them used ancient rocks, likely from Tenea ruins, that were lying around. The local church has a carving of the Ancient Greek god of winemaking and theatre, Dionysus, embedded in the wall. “We think it was part of an ancient theatre, which we’re still searching for,” she said.

Chiliomodi is a peaceful, pretty place, largely untouched by tourism. The discovery of the ancient city nearby has brought energy and excitement to the community. In the bakery I noticed bottles of local olive oil named “Tenea”, and there’s a shop of the same name due to open nearby.

Korka and her colleagues Konstantinos Lagos and Antonio Corso, who were driving with us, told me that the project didn’t go exactly to plan to start with. “We had a small team and very little funding,” they said.

The search for Tenea began in 1984 when Korka was just five years into her career (Credit: Jessica Bateman)

A geophysical survey of the area was carried out by a third party using technology. But when they started to dig, they found nothing – the shapes seen during the survey had been created by the limestone soil. “So we went back to where the first sarcophagus was found,” she said. “Nearby we found about 40 others… they just kept coming out of the ground one after the other. It was like [the folk tale of] Ali Baba.”

Next, they discovered part of an ancient road, which lead the team to a Roman mausoleum from around 100BC in which several generations of a family were buried, plus a cistern that would have been used for rituals and sacrifices: “We knew this was outside of the city, so we decided to dig north instead.” Last October, houses were discovered, and the team realised they had finally found the city itself. “Most of the surface level findings had already been taken by looters,” Lagos said. “But most of the actual city is 2m or 3m below ground.”

We stopped at a house in Chiliomodi that is being used as the conservation centre. The team excavates during September and October and spends the rest of year analysing artefacts and studying historical texts. Lagos told me that a huge number of coins have been found on the site, proving Tenea was a very wealthy place. “We’ve found around 200 – you normally only get these kinds of numbers after many years of excavations,” he said. He showed me gold leaf imitation coins that would have been buried with the deceased as a gift for the boatman in the underworld. “Most people [at the time] were buried with pennies,” he said. “But in Tenea they used gold.”

How to visit Tenea

The team is open to guiding visitors and organising educational events while the dig takes place in September and October. You can communicate with them through the Tenea PrjctFacebook account.

Other finds include exquisitely painted vases, engraved lanterns and metal tools used by athletes (to scrape off the oil they cleansed their bodies with), leading the team to believe there is a stadium they have yet to find.

“Almost everything in Tenea is unique,” Korka said.

This backs up what the team knew about the society from historical texts: “The people here were different – they were Trojans. They had their own identity,” said Korka. As well as being from a different place – the city of Troy was located in what is now Turkey, around 600km – the finds so far show they used different styles of ceramics and had different burial tradition to those living in nearby Corinth and Mycanae, such as placing the coin on the chest rather than in the mouth, as was common elsewhere in Ancient Greece.

Korka and her team have uncovered a huge number of coins at the Tenea site, as well as vases, lanterns and tools (Credit: Jessica Bateman)

But one of the biggest mysteries surrounding Tenea is why it disappeared. Most other major ancient Greek cities, such as Sparta, Athens and Corinth, remain inhabited to this day. It was unusual for a city as large as Tenea – there were probably around 100,000 inhabitants – to be completely abandoned, and no historical texts give a clue as to why.

We headed back to the car and drove up towards the mountains, as Lagos began to explain the team’s theory. “We know Alaric, who was king of the Visigoths, raided Greece in 397AD,” he said. Historians believe he destroyed cities partly to gain wealth, but also to spread Christianity. “We discovered a coin that was issued by Alaric’s people.”

However, that wasn’t the end of the story for Tenea. “We have found evidence of inhabitation from 200 years later, but it appears Tenea had lost a lot of its wealth,” he continued, explaining that the finds from this period were not as grand or valuable as the earlier ones. “But after that, there’s nothing.”

Korka and her team believe that the residents fled to the hills when the region was invaded by the Slavs (Credit: Jessica Bateman)

The car climbed up a winding road, giving us spectacular views over the mountains and the plain under which Tenea rests. We stopped at a beautiful, crumbling Byzantine-era monastery. “We know the Slavs invaded this area around that time. We believe the people of Tenea abandoned the city and fled to these hills here,” he said, gesturing around us. The Slavic tribes are known to have raided the area and violently clashed with local communities, so it seems Tenea’s residents judged the hills to be safer. There were many streams around the city, and with no-one to attend to them they covered the city in silt, which eventually turned to earth and covered the city.

Tenea’s discovery has answered many mysteries already, such as where the city was located and perhaps why it was abandoned. But for the team, the most exciting thing is what it still may hold. They are expecting to find more houses, temples, a theatre and a marketplace – known in Ancient Greek as an agora – over the coming years. “It’s like an iceberg and we’re just hitting the tip,” Lagos said. “It’s going to keep giving interesting findings for the next 100 years.”

Source: BBC.com
(Unearthed is a BBC Travel series that searches the world for newly discovered archaeological wonders that few people have ever seen.)