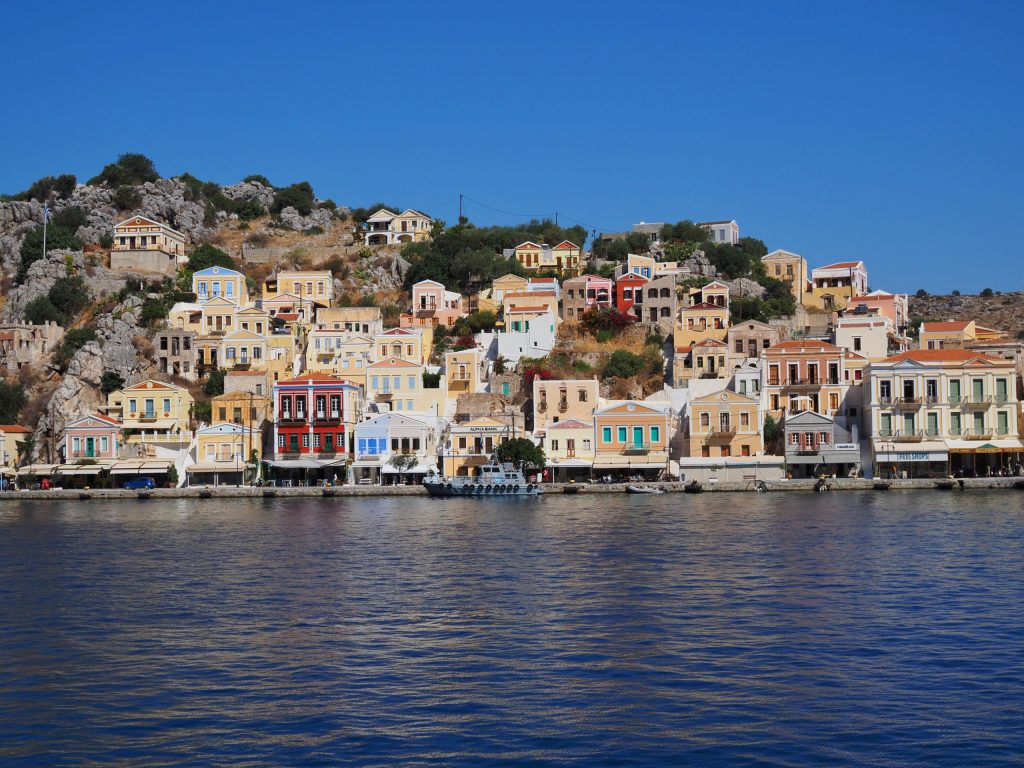 Symi, one of the entire Aegean Sea’s most elegant islands, as well as one of the most impressive among the Dodecanese islands, is situated 12 miles northwest of Rhodes. Its beauty could be likened to that of the Italian Riviera.

The island’s architecture, represented by some 2,500 multi-coloured neoclassical houses, is distinctive. These houses, among the country’s first to be listed, resemble sets from classic Marcello Mastroianni films.

Symi’s distinctive character helped protect the island from rampant, often unregulated, construction activity witnessed on other Aegean Sea islands during the tourism industry’s boom in the wider region. During this period, Symi remained unknown, attracting insightful visitors from various parts of Europe, as well as Greek pilgrims drawn to the island’s Panormitis monastery. More recently, however, the island has been discovered by a new wave of sophisticated, international travellers.

Gialos, the island’s port, and Horio, the main town

The island’s port, Gialos, as well as the main town, Hora, or Horio, as it is locally known, are nestled within a wind-protected bay featuring two gulfs with blue, pink and green neoclassical buildings alongside each other. All these houses have tiled roofs with gables and portholes, highlighting the island’s link with shipping.

From Athens, reaching the island can take as little as two-and-a-half hours, via a 40-minute flight to Rhodes, followed by a one-hour flying dolphin crossing to Symi. In other words, visitors travelling from the Greek capital may settle at Gialos for a coffee in no time. Nowadays, the port, during the summer months, attracts many private yachts, many arriving from the Turkish coast, which adds a cosmopolitan touch to the overall scene.

Gialos’ harbour clock tower, built in 1881, and the police building, both reflecting the period of Italian rule on the island, which lasted until the end of World War II, are trademark features at the port. Heading up stone-paved steps, some 500 in total, with many points offering exceptional views, leads to the main town. Symi is picturesque all over, no matter where you look. At Hora, definitely stop to inspect the Hatziagapitos-Hatzioannou and Farmakidis mansions, both hosting the island’s archaeological and folklore museum complex.

Symi does not have an extensive road network, but offers lovely beaches, which can be reached by boat, vehicle, or on foot. Taking a boat tour around the entire island is a great idea. It is also worth visiting the impressive Panormitis monastery, where, incidentally, many Turkish travellers also visit to worship.

Symi offers lovely beaches, which may be reached by boat, vehicle or on foot. Photo: Shutterstock

Agios Nikolaos, a pebble-covered beach with crystal-clear waters, also located close to the port, is one of the island’s most impressive beaches. A road reaches as far as Pedi beach, from where you may take a boat or walk along a trail to reach Agios Nikolaos. The beach, with tamarisks as well as umbrellas, also features a lovely little church devoted to Saint Nicholas, as well as a charming small taverna.

Ai Giorgis Dysalotos is the island’s most impressive beach. It features waters that are as blue as can be as well as an impressive rock offering protection as well as shade after midday. This beach can only be reached via the sea, so make sure you have everything you need when visiting.

On the contrary, Marathounta, on the opposite side of the island, is easy to access. It is covered with coarse pebbles. Beach footwear is advised. The beach has a small taverna and umbrellas. The islets Sesklia and Nymos, both reached by a boat, a short and comfortable trip, also offer fine beaches.

If seeking serenity and seclusion head to Toli, reached via an 8-km road from the port that is relatively smooth, except for its final section, a dirt road. This beach offers turquoise waters and a taverna.

Nanou, which has also gained popularity of late, may only be reached by boat. This beach is covered with big pebbles. It offers a taverna and features superb waters that deepen abruptly.

It is worth visiting the island’s historic Panormitis monastery, built in the 15th century. Photo: Nikos Maounis

Things to do on the island

As mentioned above, it is worth visiting the historic Panormitis monastery, an impressive 15th-century monument built on the edge of a cove, at an expanse with cypresses and pine trees. The monastery is devoted to Saint Michael the Archangel, hosts two museums, one exhibiting religious art, the other folk art, a library, and has cells for visiting pilgrims.

Also definitely visit the castle at the main town, offering an impressive view. Besides the ruins of the fort of the Knights of St. John, the castle also features an icon of the Second Coming, painted by distinguished post-Byzantine icon painter Georgios Klontzas, as well as the municipal clinic, where old pharmacy equipment is kept.

The colorful alleys of Kali Strata are among the most elegant attractions on Symi. Photo: Nikos Maounis

The archaeological and folklore museum complex is housed, as previously mentioned, at neoclassical mansions in the main town. A model presentation of a typical old Symi home, traditional costumes, as well as an archaeological collection of discoveries made during excavations on the island are all worth seeing. The maritime museum, in Skala, once hosting the island’s shipyard, is also housed at a neoclassical house. This museum features a section focused on sponge divers.

At Myloi, Pontikokastro, as a pre-historic burial mound is known, is worth seeing. The location also hosts windmills where grain was once ground. Nowadays, some of these windmills have been converted into homes. The multi-coloured alleys at Kali Strata are also an attraction.

If interested in discovering the island on foot, the best trekking trail runs from Hora, the main town, to Panormitis. Many lush spots ideal for relaxation are encountered along the trail, as are numerous churches as well as the Megalos Sotiris monastery. From this location, take a detour leading to the Kourkouniotis area, within an idyllic cypress forest. The area features eleven restored traditional stone presses.

Definitely take a boat tour around the island as many spots cannot be seen any other way. Seaside Gialos is the island’s nightlife attraction. Along with Ano Hora, it hosts the island’s best bars.

Manos is another great fish taverna, as suggested by many customers arriving on yachts every night. Impromptu celebrations are frequent here.

Marathounta, a small seaside taverna at the synonymous pebble-covered beach, is another fine choice for food. It is renowned for its fish, but also prepares kid goat recipes, from the taverna’s own livestock farm, as well as Symi meze dishes.

Aliki hotel, a seaside neoclassical mansion on the edge of Gialos, is one of the finest buildings on the island. Its features include stylish furniture, spacious rooms with old brass beds, and wooden panelling.

Aliki hotel is housed at one of the island’s finest mansions. Photo: Hotel Aliki Symi

Close to the town’s square, this accommodation choice is also situated near the port. It features distinctive neoclassical architecture, has a paved yard, a bar and stone arches leading to a sheltered swimming pool.

On the seaside road towards Emporeio, Odyssia Apartments has a restaurant and features a marvellous view of the entire island. Its rooms have small kitchens.

Opera House Hotel, offering rooms and suites in the center of the main town, features a garden with olive trees and flowers.

A complex of apartments at a newly constructed building, Taxiarhis has big courtyards, rooms with kitchens, and verandas with views of the sea and town. Breakfast may be served upon arrangement.