All Covered on Foot in Schinoussa – the Pedestrian Island 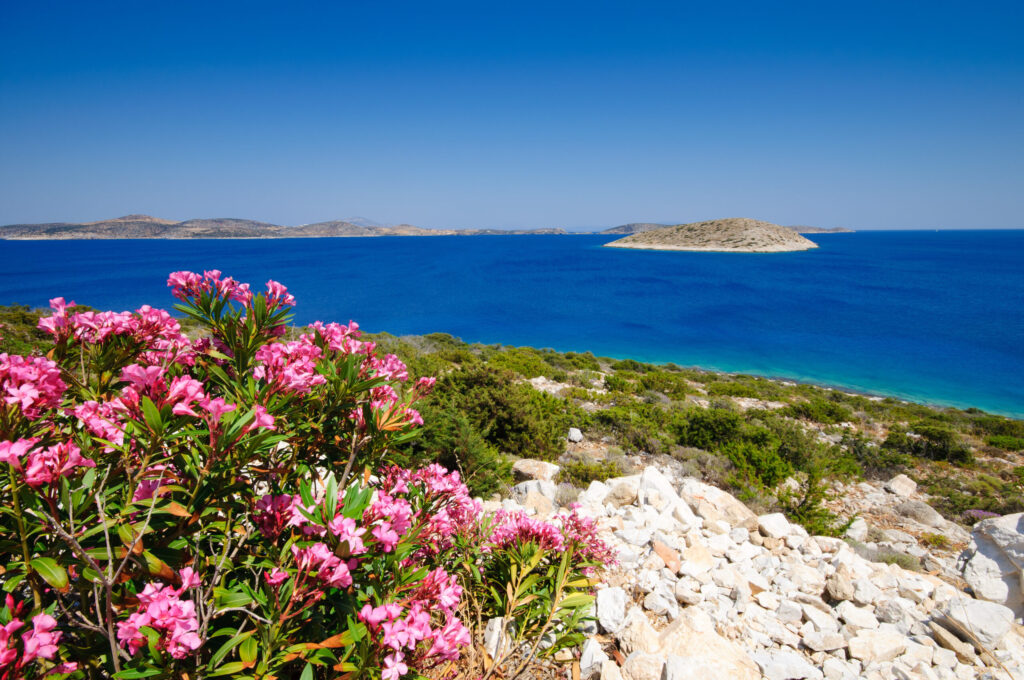 Schinoussa, measuring a mere nine square kilometres, could be fully covered in just a few hours on wheels but generally visitors refrain from disturbing the island serenity through the use of vehicles. Distances are short, the pace of life is relaxed, and the flat landscape makes walking ideal.

This island is a favourite spot for yachts with unique beaches, hidden bays, small tavernas serving local delicacies, and an uncontrived hospitality that make Schinoussa very appealing for visitors with their own boat. However they get around, though, many visitors establish deep bonds with the island and return over and over again. The lack of attractions on the island enables holidayers to do little more than enjoy their carefree time at the beach, to eat leisurely lunches at the chilled tavernas, and to sip raki spirit at night at sleepy spots along the main town Chora’s alleyways.

Schinoza Luxury Suites: This complex is comprised of suites with private pools and jacuzzis. Its exterior design, both minimal and traditional, blends harmoniously with the natural setting, while its interior is dominated by discreet luxury and comfort. (Schinoussa, +30 2285076609).

Harama: These rooms for rent offer comfortable, well-attended spaces that look out onto an elegant garden as well as a restaurant. (Messaria, +30 2285076015).

Captain Cook: This spot has tables set on a veranda with a superb sea view. Its menu, primarily focused on fish and seafood dishes, covers the Greek and Mediterranean culinary territory. (Close to Tsigouri beach, +30 6930165263)

Stop off on the way to the beach to explore some of the island’s lovely hidden details.

Kastro: A partially preserved Venetian castle at the southwestern side of the island, it is situated above Fountana beach and the view from this point is exceptional. The castle is believed to have been built in the 15th century to protect locals from pirate raids.

Maniatis Cave: According to legend, the history of this small cave, wedged between tall rocks, is associated with a pirate from Mani in the Peloponnese who set off to Schinoussa to raid the island. The pirate noticed the Panagia Tis Akathis church which he entered intent on stealing its treasures. However, he felt the eyes of the icon of the Virgin Mary persistently staring at him. Irritated by this, the pirate took aim and shot at the icon. On his way back down to his boat, close to the cave, he slipped and fatally wounded himself. Locals found his corpse and set fire to it, and the cave, on the road headed for the port, was thus blackened by the smoke.

Alygaria or Kabos: A lovely sandy beach with rocks, it is not serviced, nor does it offer natural shade, so come prepared to ensure relief from the sun.

Fountana: A small rocky beach, it does not have much sand but its turquoise waters are superb. Make sure you have beach umbrellas or other cover and water.

Lioliou: A perfect sandy beach, it offers exceptional waters and tamarisks for shade at the back, while a restaurant is located nearby.

Ai Vassilis: A lovely little beach covered with fine pebbles, its seabed is rocky and there is no shade here.

Livadi: A big beach with golden sand, Livadi, endowed with transparent waters and featuring a line of tamarisk trees for natural shade, is ideal for families with young children. A small taverna is found behind the beach.

Almyros: The perfect shallow waters here will delight youngsters and the beach has tamarisks for some welcome shade.

Psili Ammos: This beach’s superb waters are sided by rocks at one end and a sand dune at the other. Finding shade is a challenge but the views across to Amorgos and Koufonisia are ample reward.

Fykio: A pint-sized beach, it is lovely and ideal for serene swimming in seclusion. Lots of seaweed is often pushed out onto this beach, as indicated by its name in Greek.

Tsigouri: The island’s most renowned beach, Tsigouri, big and sandy, features plenty of tamarisks and a beach bar. A rock islet, Plaka, just 200 metres away, can be swum to or reached by canoe.

Piso Ammos: This is a gorgeous beach with a narrow strip of sand and many tamarisks. A couple of cafes and restaurants are located in the area.

Gerolimnionas: One of the most impressive beaches on the island, its waters are deep. Make sure you are equipped with beach umbrellas or other cover for shade.

Pori: A tiny beach, it offers just a touch of sand hidden at the mouth of a cave.

Ofeidousa: A small and uninhabited islet opposite Ai Vassilis beach, it offers a superb stretch of white sand and gin-clear waters. It can only be reached by boat and the islet is a favourite of nudists.

Schinoussa’s small size enables visitors to cover everything on foot and bond with the natural setting. One of the most impressive trekking trails begins from the main town and reaches the top of Vargies hill, the island’s most elevated spot with an old windmill and a marvelous view, before descending all the way to Gerolimnionas beach.

Visit Tsigouri beach and besides the canoeing and diving, there is rock climbing at the Plaka rock islet just opposite with many routes. The spot is open to all, but climbers must have their own equipment and are fully responsible for their activities.

How to get there

By ferry from Piraeus, Koufonisia, Iraklia, and Naxos