The Mystery behind Greek Temples 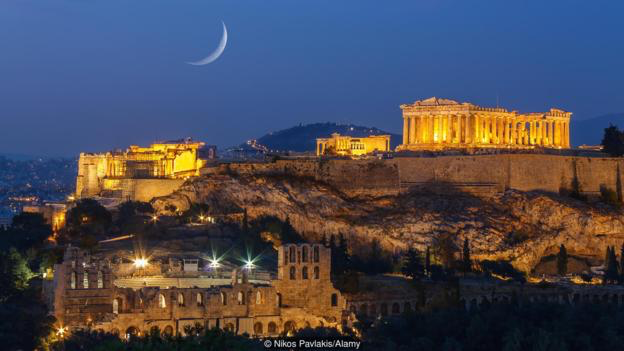 When I was a little girl, I would pester my grandfather with the same question every time we wandered the flagstone streets of Athens’ Philopappou Hill on a clear evening. I would wait until we had reached the 147m peak, with the Parthenon at eye level, to ask:

“Why are the stars shining so brightly from here?”

“Ancient Greeks were wise. They knew where to build their sacred venues,” my grandfather would say, unfazed by the annoying excitement in my voice. “These are places symbolising something greater than us.”

Some astronomy enthusiasts believe Greece’s temples were built to align the inhabited parts of Earth with the planets in the sky (Credit: Nikos Pavlakis/Alamy)

In retrospect, I can’t help but wonder if this beautiful explanation was inflated by my grandfather’s immense pride in Greek culture. But Manolo Fernandez, a Spanish language teacher and amateur astronomy enthusiast, shares my grandfather’s opinion – that the placement of Greece’s temples was not random.

“These are places symbolising something greater than us”

I first met Fernandez amid the ancient ruins of the Parthenon during a late June heat wave. Surrounded by the temple’s stately Doric columns, he unfurled a map of Greece. “Look at the map, there,” he said. “The temple of Poseidon in Sounion forms an isosceles triangle with the Hephaisteion in Athens and the temple of Aphaia Athena in Aegina. Apollo in Delphi, Aphaia in Aegina and the Parthenon, the same: they all form perfect isosceles triangles!”

Fernandez is sure that the triangles made by the sites reflect the movements of different celestial bodies such as the sun, moon or planets and stars in relation to the Earth’s surface. This theory frequently leads him to the National Observatory of Athens to attend stargazing events. Inside a domed marble building, the Doridis telescope provides visitors like Fernandez with marvellous views of the night sky. Having seen the moon, Saturn, Mars and various constellations through the telescope, he is adamant that “the temples of Greeks were built to align the inhabited parts of the Earth with the planets in the sky.”

The temple of Aphaia in Aegina is said to form an isosceles triangle with several other temples across Greece (Credit: Dimitrios Iatrou/Getty Images)

The idea of a triangulation of the Greek world is not new, but rather an example of ‘sacred geography’, or how religious sites were situated according to astronomy or mythology. In the 1960s, Jean Richer, a French literature professor (with a special interest in symbolism, esoteric doctrines and Greek mythology) at the University of Nice Sophia Antipolis in Nice, France, described it as a ‘grand design’ bonding sacred sites with each other and the sky. He imagined Greece to be divided into 12 sectors reflecting the 12 signs of the zodiac, with the oracle shrine of Delphi as the omphalos, or ‘navel’, of the Greek mainland.

But sacred geography theories like Richer’s never earned proper respect from orthodox science as they could never be proven.

“Let’s start with Acropolis. Which temple was used as the Acropolis point for a start? The Classical Parthenon, the Archaic Parthenon, the temple of Athena Polias or the temple of Athena Nike?” asked Efrosyni Boutsikas, archaeology lecturer at England’s University of Kent, who focuses on ancient Greek astronomy, mythology and religion. “If we are talking about creating precise geometrical shapes like an isosceles triangle, we need accuracy of less than a metre. These temples are several metres apart so you can take your pick on choosing the one which gives you the most precise isosceles, but this does not mean that the shape would have had any significance for the Ancients.”

George Pantazis and Evangelia Lambrou, associate professors at the National Technical University of Athens, recently used rigorous geodetic methods to determine the astronomical orientation of Ancient Greek temples. The pair zeroed in on the temples of the Parthenon and Hephaisteion, two of the greatest temples of the classical era, both of which were dedicated to the goddess Athena (though Hephaisteion was also dedicated to Hephaestus).

They found an extraordinarily symmetric positioning between the temples, ensuring both had the same view towards the east. “The astronomical orientation of temples has to do with the sunrise on the celebration day of the god to whom the sacred site is dedicated,” Pantazis said. “The sunrise must occur exactly on the central axis of the temple in order to illuminate the central statue of the worshipped god.”

And there are a slew of other studies indicating that classical temples were built to align with the stars, although not at the scale Richer imagined. Still, the emergence of the field of archaeoastronomy, the study of ancient cultures’ astronomical knowledge and implementation, is bound to make the connection between astronomy and religion even more fascinating.

The sun would once have illuminated the central statue of worship at the temple of Apollo (Credit: Sizun Eye/Getty Images)

Tourists who roam Athens’ historical centre during the day make their way to the observatory come sundown to see which stars will emerge in the night sky. As I joined the queue at the entrance, I spotted a familiar man. Fernandez, the fervent stargazer, would soon be marvelling at the Milky Way, an experience I am sure left him even more bent on uniting the celestial objects above with the sacred sites on the ground.

Unable to resist, I tagged along and waited for the exact moment to ask: “Why are the stars shining so brightly from here?”