The Best Time To Visit London, According To Travel Experts 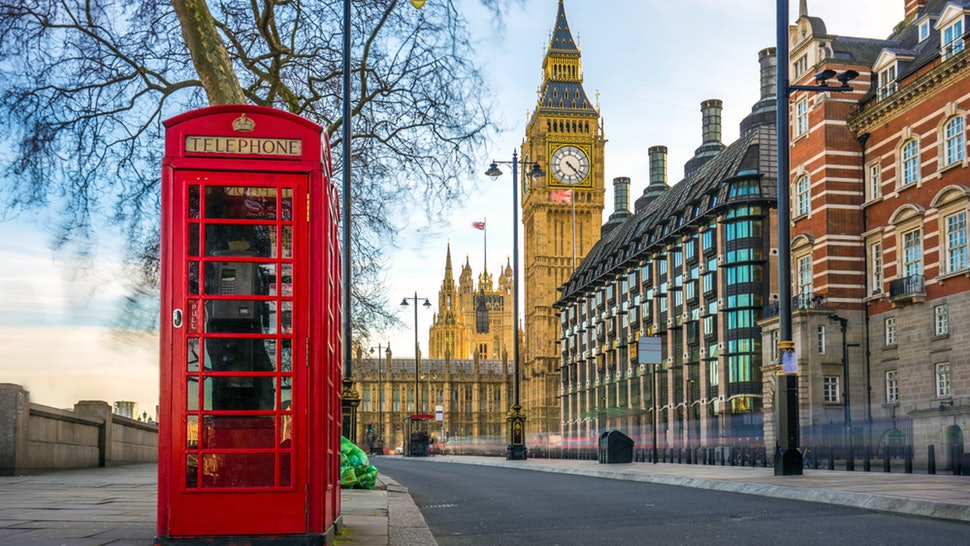 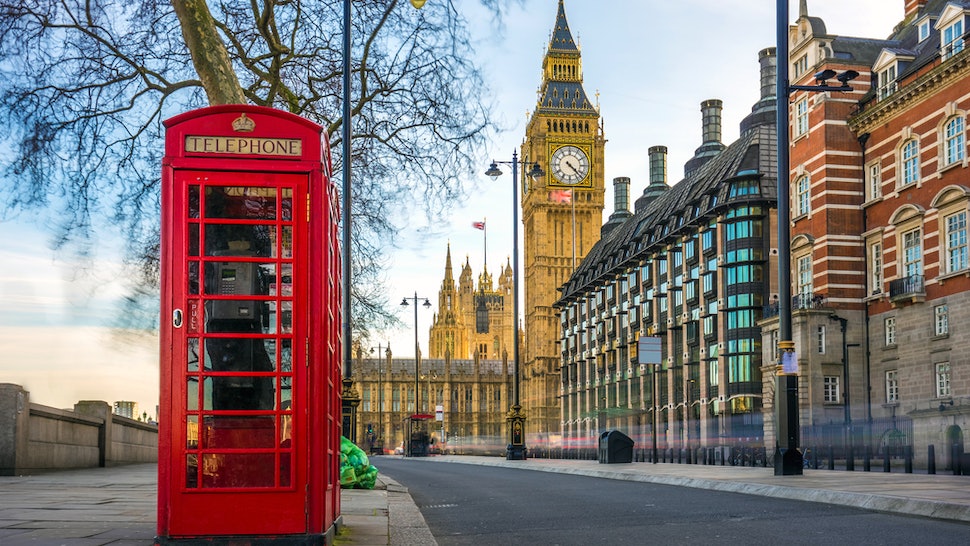 Even though you may have just rewatched The Holiday — the rom-com where Cameron Diaz’ character switches homes with Kate Winslet’s character and ends up in England — take a moment before you jump to book your plane ticket to London. Yes, you may think there’s “no time like the present,” but first figure out what your travel goal is: Do you want to save money and go in the off-season, or do you want to go ASAP, even though airline prices may be higher and there may be more tourists? In any case, if you take travel experts’ advice, you can figure out the best time to visit London.

As the largest city in the United Kingdom — with 8.95 million people as of July 2019, according to Population UK — it’s no surprise that London attracts a lot of tourists. Overall, millions of people go to the UK each year; in February 2019, VisitBritain projected that 38.8 million people would be visiting this year. And looking up traveling to London is popular among Americans, too; in 2019, it ranked number nine on KAYAK’s “Most Popular Destinations” list, which is made up of the most-searched cities in North America.

But when should you go to the country’s capital city? “There’s never a bad time to go to London, but there are definitely pros and cons to each season,” Steve Sintra, Regional Director, North America at KAYAK, tells Bustle. “And from history to culture to nightlife, the city offers something for everyone — it just depends on what you’re looking for.” Below, he and other travel experts weigh in on the best time to go to London.

If You Want Warm Weather, Go In Late Spring Or Summer (But Expect To Pay More)

Sintra says that summer is the peak tourist season in London — and for good reason. “Not only is weather at its best, but the social calendar is packed,” he says. “If you’re a fan of British Royalty, this is a great time to visit: several residences are open to the public, and the famous Trooping the Colour — the Queen’s birthday parade — takes place in June.” He adds that other other notable summer events include Pride events, Notting Hill Carnival (one of Europe’s largest street festivals), and some of the capital’s biggest music festivals.

However, going to London in the summer can cost you. “The popularity of this time period does quite literally come with a price: June and July are among the most expensive months to fly there — with median airfare respectively at $779 and $791 — and nightly hotel rates are also the most expensive during these months,” says Sintra. “You can also expect larger crowds and longer lines during this time.”

Carey Malloy, director of brand & marketing at Orbitz, agrees. “High tourist season — late spring through summer and December for holiday market season — will certainly mean crowds, higher hotel prices, and lines,” she tells Bustle. But, you can always consider flying a budget airline or exploring secondary airports nearby. “For instance, Stansted Airport is known for its budget carriers and could offer some savings if you’re willing to make some tradeoffs on comfort, snacks, and in-flight entertainment,” she says.

Malloy also points out that London in the summer means you’ll be competing for tickets to Broadway shows, museums, and tours. But if summer is the only time you can, or want, to go, she suggests booking tickets and activities in advance, especially those you really want to see. “On Orbitz, you can book dining, sightseeing, guided tours, and more — and you won’t have to wait in line or worry about something being sold out,” she says.

And keep the weather in mind, too. “Pack layers and always bring an umbrella,” Malloy adds. “Summers tend to be quite nice, but expect more moderate temperatures.”

If You Want To Go For Holiday Festivities, Go Around Christmas

Mariel Clark, VP of home & travel digital — Discovery Inc., tells Bustle that London at Christmastime can be nice. “If you have the budget and are hoping to experience London’s world-renowned holiday festivities, you’ll want to make your travel arrangements around Christmas,” she says. “While you’ll have to brave the crowds of tourists and increased airfare and hotel pricing, you’ll be able to take full advantage of the iconic Christmas markets and charming architecture that London is known for.”

Sintra agrees about it being a festive time to see London — if you have the money. “If you love holiday cheer, December is a great time to visit — the city is lit up with Christmas lights and there are several fun holiday markets to peruse,” he says. “But median airfare is the most expensive in December at $796.”

If You Want To Spend Less, Go During The “Shoulder Season”

If you want to visit London when it’s less crowded and for less money, the shoulder season is a good option, says Malloy. “The weather can be a little unpredictable, but in general there are good deals September-November and March-April,” she says. “A quick search on Orbitz is actually showing some really affordable airfare to the UK right now for late August, so there’s definitely still plenty of good deals out there.”

Sintra, too, thinks April’s a good time to visit London. “It offers an intersection of affordability, mild temperatures (and fewer showers), and plenty of fun activities,” he says. “Median airfare can be found for under $600 and hotel rates will only set you back about $222/night (versus July when they run about $260/night).” He also points out that the famous Changing of the Guard at the Palace takes place daily starting in April, the royal parks and gardens are blossoming, and you can also celebrate England’s National Day, Feast of St. George, in Trafalgar Square in late April.

But, Sintra also recommends seeing London in the fall. “Crowds have thinned, median airfare and hotel rates are cheaper, and with festival season in full swing, there is plenty to do,” he says. “London Fashion Week is in September, the prestigious BFI London Film Festival is in October, and one of the country’s biggest annual celebrations — Guy Fawkes Night, deeply rooted in British history — takes place on November 5.”

If You Want To Go To London On A Budget (And Spend Even Less), Go During The Off-Season

Sintra says that if you’re looking to do London on a budget and don’t mind chillier temperatures and rain, you can score great travel deals in January and February. “Median airfare prices hover at just a little less than $600 and hotel rates around $200/night,” he says. “In addition, you can score highly discounted tickets to London theatre during this time, and January offers sales at major retailers.” Not only can you find many free attractions to do in the city, but if you don’t like crowds, lines will be shorter around town, too, he adds.

Clark, too, says that before planning a trip across the pond, think about your travel budget and priorities. “If you’re part of the majority of Americans who find that traveling on a budget is more enjoyable than splurging [according to a survey on behalf of Travel Channel among 2,196 nationally representative respondents], you’ll want to plan on visiting in between holiday seasons, ideally in November, or January through March,” she says. “That’s when prices decrease, the weather has cooled, and crowds begin to dissipate.”

Malloy also suggests going to London in January and early February. “Flights to London were really affordable at the start of the year, which is typically the low tourist season in the UK,” she says. “Airfare demand drops off a bit after the busy holiday season and demand for hotel rates haven’t yet ramped up for the spring and summer seasons.”

And, according to data that Skyscanner pulled for Bustle, January, February, October, and November are the cheapest times to fly to London, with sales frequently occurring in January and February, a Skyscanner spokesperson tells Bustle. “It’s no surprise that the further out you book travel, the more likely you are to receive a better travel deal,” they say. “Flights booked at least five weeks in advance will frequently be lower than the yearly average while flights booked 90 days in advance are almost half if you were to book less than three days in advance.” As for the most popular months to book travel — aka Best Time To Book, BTTB — Skyscanner says it’s January and September, according to data they looked at from 2017-2019.

Judging from the above, the best time to go to London all comes down to what you want to do while you’re there — whether that means enjoying the summer weather or winter festivities — as well as your budget. As Sintra said above, “there’s never a bad time to go to London,” and the only way to find out is by going and checking it out for yourself.