Revealing the other side of Mykonos

“Mykonos: The Other Side” is a documentary taking viewers beyond the party scene of Mykonos, to reveal a multitude of facets

The island of Mykonos is synonymous with days spent lying in the sun and partying. However beyond the pristine beaches, sculpted bodies parading around, and 24/7 party scene, the Cycladic island has much of great substance to offer its visitors.

For Sydney-based filmmaker Billy Cotsis, he admits it took at least five visits to realize this, and to fully understand and fall in love with ‘the other side’ of the island.

“Too many people, myself included, come for the parties,” he told Neos Kosmos. 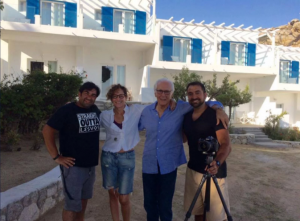 “‘The other side’ is the non-commercial elements; the quieter beaches, the ghost town at the old mines, churches in the hundreds, villages such as Ano Mera which counter balance the hustle and bustle of Mykonos Town, and Delos, which is just a 20 minute boat ride away.

“The camaraderie of the workers from everywhere, be it Greece, Greeks from abroad, Europe, and the world – everyone seems to look after each other.”

Which is what he sets out to capture in his latest documentary Mykonos: The Other Side. 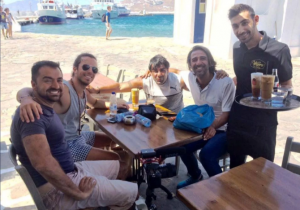 Co-produced with fellow Greek Australian filmmaker, London-based Basil Genimahaliotis, the idea was conceptualized by the pair in 2017, and realized on location in Mykonos over just seven days, incorporating additional footage from London and Sydney.

The film features a number of locals and internationals, who call the island home, including a group of Australians who live and work there. Their personal narratives, their commitment to the island and the challenges that come with trying to make ends meet in a struggling economy, show viewers a side of Mykonos few tourists have the chance to see.

“We try to present a series of chapters, and there is no escaping the party, [but] once we eliminate the fun part, we get to unpack what Mykonos is: the island of culture, a thriving economy, architecture, the arts, hidden gems and ‘characters’ on the stage that is Mykonos,” says Cotsis.

Among the characters featured are 25-year dancing veteran, Tekno ‘Mr Mykonos’ Manos from Bay Vista, Brighton, film director Antonis Theocharis Kioukas, American author Jeffery Siger, actress Anta Paparapti, Gege Silva the Drag Queen, Anna Moskalova from Hair Lab, and Nicholas Theodoridis who works at Vegera by the old harbour, who used his local knowledge to connect the filmmakers with many of their subjects. 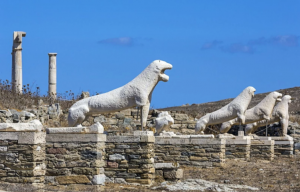 “These are just some of the people who appear and help tie the narrative together,” says Cotsis. “We actually have enough footage to make a second documentary – you have no idea how easy it is to capture stories on Mykonos. There is something about the island that makes people open up.”

Cotsis’ own relationship with Mykonos is an interesting one. The filmmaker says he first happened upon the island “by accident” while island hopping in 2004.

Given the reputation of its commercial side, he admits he never had a desire to visit. But after that chance encounter, he couldn’t deny the pull.

“As much as I tried to fight it, I finally admitted that I love Mykonos and the fact that it sets an example as a leader for the tourism industry,” he says.

“It has what many places in the world do not; a level of sophistication, history, support for arts, a viable economy and resilience.

“I want people to understand that Mykonos is one of the most cultured places in the world. Yes of course you can party; however, if you scratch the cultural surface you will find a different Mykonos, which will come out in the film.”

Thanks to local support from the Mytilenean Brotherhood of Sydney & NSW, Bay Vista in Brighton, MerakiTv Foxtel and Hellenic Central, Mykonos: The Other Side will make its world premiere at GU Film House Beverly Hills next month.

Set to be presented by Greek Australian filmmaker and writer Alex Lykos, attendees will be treated to a double screening together with Cotsis and Genimahaliotis’ last documentary Lesvos: Fall in Love.