Ιmportant actions of the Municipality of Mykonos regarding the promotion of the island. 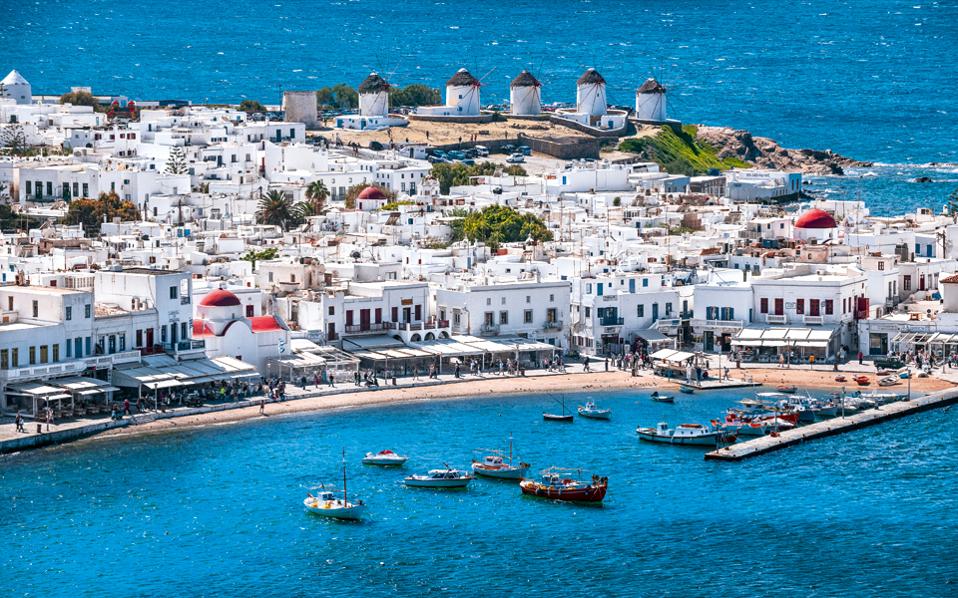 A series of purposeful actions has been included by the Municipality of Mykonos’ promotion program on the international markets from the Fall of 2011 up until today, with the contribution of the Municipality’s consultants. Taking into consideration the wider adverse financial and political circumstances as well as with the current extremely limited economic forces of the Municipality, the promotion was based on specific axis:

1. Creation – destination intelligence – or in other words a database, which is continuously enriched with new data and includes 2 components:
External environment study using advanced marketing tools (ex PESTLE) and extensive bibliography, so as to update Mykonos’ businessmen information on the location of the destination with regard to changes in the external environment’s changes, new trends and the financial crisis.

Research on the intentions of Mykonos’ professionals regarding the markets of interest and target groups. The questionnaire distribution concerning the geographic and demographic priority markets is also under way.

2. Substantial travel markets entries that meet quality standards:
The presence of the municipality at the international travel markets MITT (Moscow), ITB (Berlin), BIT (Milan), FITUR (Madrid) was combined with special promotional actions, such as hosting offering to the public via drawing and the the special promotion action, with promotional material, at Milan’s “Kolonaki”, the popular Brera district, in brand stores in cooperation with the local GNTO Office. After a systematic effort of two years, a ‘treasure’ of 6,000 names and contact details of visitors to international and domestic travel markets has been created. The aim of the Municipality is to make a good use of them with the help of modern electronic means for sending newsletters and conducting surveys.

Scheduled meetings with journalists took place within the framework of the travel market entries. The aim was to strengthen the relations with the new representatives of the media, as well as to reconnect with the existing contacts. Within the framework of the meetings, the intention for travel features in the written media was ensured, as well as the integration of Mykonos into the publishing house’s plans of creating a special travel guide.

3. Public Relations actions
Particular emphasis was given to the implementation of Public Relations actions, with the guidance and the contribution of the Council’s consultants regarding the implementation. A network of journalists and strategic alliances of consultants and agencies (such as the active offices of GNTO of Milan, Great Britain, Paris, Berlin, Moscow, Madrid and the Press Office of the Greek Embassy in Moscow) was activated οn time and was used as to implement, without any financial burden from the Municipality, a multi-national public relations program that will highlight the multi-dimensional tourist “product” of destination regarding culture, lifestyle, nightlife, tradition, history, gastronomy and unparalleled natural beauty. The program was based on the following directions:

A. Priority to reputable television programs:
Ιntegration of the destination into the popular show “CruiseToday” by the internationally famous tv colossus “Travel Channel” international, which was broadcast in 119 countries.

Exclusive shooting in Mykonos of the travel show by Japan’s top television channel, FUJITV, aiming to portray, in prime time to its about 10 million viewers, the way of life and the beauty of our island, mainly on the side of tradition and authenticity, focusing on Ano Mera and other areas.

Exclusive shooting in Mykonos of special episodes from the world-renowned reality show on British TV, X-FACTOR, after a concerted 3-month preparation between the Municipality’s consultants, the London-based GNTO Office and television broadcasters operating in the UK. According to a report in the British newspaper “Mirror” (http://www.mirror.co.uk/news/uk-news/mykonos-booking-enquiries-up-433-83205), British tourism professionals estimated at that time, as a result of the show, a rise in bookings up to 433% in comparison to the corresponding period of previous years.

Exclusive shooting of the Spanish show “¿Tequierescasarconmihijo?” “¿Quién quiere casarse con mi hijo?” (“Who wants to marry my son”). The show, which accumulates high ratings in audience, up to 35% of the whole audience, covering the range of viewers’ economic and social stratification, was transmitted from Spain’s popular channel “4”, with an impressive viewing of 3,000,000 households.

In the immediate future, these video shoots are scheduled on the following media:

– Integration of the destination into a travel show by the Russian TV channel “Myplanet” or “Moya Planeta”. Said channel has been operating since 2010, being a pioneer one as it is the only one on the Russian territory that operates on a 24-hour basis, broadcasting -οnly- an educating program, accumulating a dedicated audience of millions of Russian viewers, who belong to the middle and upper social and income strata.
– Integration of the destination into a TV show, which will be broadcast on the network of the strongest TV channels France24, TV5 and MENSTV.- Integration of the destination into a popular Italian TV program, giving emphasis on Maritime Tourism on behalf of the Nautical Channel, targeting the highest income strata.
-In addition, the visit and hosting of the internationally renowned German journalist and producer of travel television films, Mr. Gogol Lobmeier, is also scheduled.
B. Selective public relations actions for managing the current situation:
In an extensive feature in the issue of March of the internationally renowned american magazine CondeNast Traveler, the Island of the Winds is ranked among the best cruise destinations in Europe, having as its cover Paraportiani of Mykonos as well as an extensive report, while in the main article the publisher Clara Klaveska dedicates many praising comments to the island and Greece, informing readers of the “Bible” of Tourism that shapes the worldwide trend, that … “now is the best time to travel”.
In collaboration with the GNTO Οffice of London, Mykonos was integrated into the program of visits by the distinguished British Tourism Editor of SundayTimes, the top British newspaper of international reach, mr. Chris Haslam. His specialty is to shape, with his pen and prestige, the trend in the British travel industry, capturing the current tourist condition that dominates in foreign destinations, as to overturn the distorted image that many international media want to project.
C. Collaborations:
It is sought to create both an original and substantial synergism. Already organized approaches have occurred, with airlines that have direct flights to Mykonos, such as BORA JET, VOLOTEA and VUELING, and the basis has been established, via strong written intentions, for the development of a collaboration on mutual terms, regarding promotion. As a result of these approaches, editor-in-chief of the official LingVueling magazine is visitng Mykonos on May 25th, aiming to promote the island through features in the official magazine which is distributed to hundreds of thousands of passengers of the international airline.
In the spirit of using modern promotion techniques, the logic of “a picture is a thousand words” was adopted by the Municipality of Mykonos to promote the island in the international market. Specifically, after an agreement between the Municipality’s consultants and the decoration company of the british chain stores “The Real Greek Restaurants”, was agreed to be placed at Covent Garden restaurant in London, two oversized photos of Mykonos 8 square meters high each, which “dominate” exclusively in the luxurious halls, reminding the customers of the popular destination. This action follows on the corresponding one at the BIT travel market in Milan, where Mykonos once again has made its “mark” with a central poster at the South Aegean Region’s booth with which it participated.
D. Maintenance of the program with selective journalists’ hosting and publishing challenges:
Indicative actions are mentioned, as well as publications that complement the PR program in Australia, the UK, Italy, etc.
Ensuring of the presentation of the destination in an extensive feature in Virgin Australia airline’s magazine, ‘inflight’. The magazine is distributed on flights operated by the popular company, which is considered one of the most powerful regarding flights from Europe to Australia. This effort will be sealed with a publication in the popular travel magazine “Vacation & Travel” in the immediate future.

Attract and organize the hosting of the award-winning editor Roger Wheeler, who contributes on Britain’s popular trendsetting lifestyle magazine, G Scene, very well-known among travelers of the age 40+ who belong to the upper income strata.
Expand the feature of the destination in the new edition of the “Rough Guides” international travel guide series, despite the fact that the coverage area of Greece was limited.

Integrate the destination into travel features of top travel and fashion magazines in Italy, “Bell’Europa” and “Elle” respectively with millions of readers.

Mykonos based Office of MTC Group Tourism Consulting Company of Municipalities of Greece.