If you’ve never visited Naxos, the biggest island in the Cyclades, now is the time to do so

Its dreamy sandy beaches with clear blue waters and magnificent sunsets overlooking the imposing Portara invite you to enjoy unforgettable holidays in the heart of the Aegean Sea. Admire the ancient remains of temples and statues that testify to the long history of the island; the imposing Portara, the gate of an ancient temple that has never been completed, a trademark of Naxos, which every visitor faces upon arriving at the port. The well-preserved temple of Demeter and the Kouros of Naxos, 11 meters long, lying in the ancient quarry of Apollo.

Explore the countless villages that are scattered in the mainland and keep the island’s tradition and culture intact. Walk to Filoti, the island’s largest village, the stone-built Apiranthos, Sagri, also known as “little Mystras” with its many Byzantine churches in the area and much more. Climb Mount Za, at the top of which is said to have been Zeus’s birthplace, and wander the narrow hillsides of the Venetian Castle of Chora and be transported to another era.

Taste delicacies with the island’s delicious local products in restaurants and traditional taverns, such as the famous Graviera cheese, the potatoes, the goat, the ‘rustic” rooster and of course the fresh fish and seafood and the famous citrus of Naxos, a liqueur that is produced by the leaves of the homonymous tree. Swim on its sandy beaches and enjoy a drink in one of the old town’s bars and cafes in the harbor with relaxing music, watching the sea and listening to the sound of the waves. 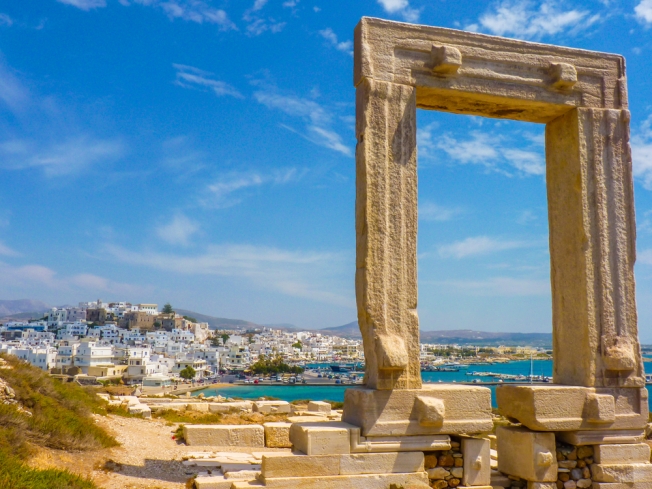 Explore the magnificent Naxos and enjoy an unforgettable experience.

Traditional 5 bedroom villa, Private Pool, BBQ, 130 m. from the beach Villa Circe is an oasis next to the…

Beachfront Villa with 3 bedrooms, private pool & BBQ Dreaming of a totally private villa for your…

Luxury Villa with 4 bedroom and private pool just 300m. from the beach Naxos Villa Lachesis is a four…